The full extent of the resources available to the Master are unknown. He is capable of mighty magics, which alter the fates and lives of mortal men. The Master managed to remove the powerful curses the character had from Tartarus through the use of Cosmic Sorcery. His touch was enough to kill the unkillable, bringing down Alcemides.

At least one hundred degenerate Acheronians serve him in his island fortress, deep in the Darkwood Forest. Dionysos speculates that the Master has access to demonic and undead guardians, which lurk unseen in his vicinity. He has obviously far reaching influence among the remaining Acheronians in Nemedia and in the cult of Ibis. Yet still only very few seem to know anything about him. Even his tools move ignorant of the strings pulling them.

“I have seen everything! I know everything, all the mysteries and truths which are too great for your puny minds to comprehend! Mere hint of my knowledge would shatter your souls!”

Even the most scholarly among the interepid heroes had never heard of the Master before their encounter in the Darkwood Forest. Guided there by the Singer for the Dead, Dionysos lead his companions to meet the mysterious sorcerer. He hoped to gain a way to release himself (and possibly his companions) from the curses of Tartarus. Dionysos ended getting more than he bargained for. For some reason the eldtrich figure liked the young, corrupt nobleman. Dionysos was given an offer he could not refuse – apprenticeship (and unspoken thralldom) to the Master in exchange for aid against the Golden Masks.

The Master seems uninterested in the Golden Masks and their cult. Perhaps he does not understand the threat they pose or perhaps he does not care. Only Dionysos has been invited to his laboratory under the fortress ruins. He has not told others what the sorcerer looks like. Lotus dreams and divination magic hint that the Master might be of an Atlantean origin. Dionysos claims he has seen a vision of a sarcophagus washing ashore somewhere in the Black Kingdoms and the Master stepping forth. Why and how the mysterious sorcerer ended up in Nemedia remains unknown. What he plans remains shrouded in mystery – but somehow, the Acheronian remnants seem to be his chosen pawns.

The Master has ominously promised to test young Dionysos during his travels. His sanity and abilities will be put to challenge and if he prevails without breaking, the Master is capable of teaching him mighty sorcery even from afar. Indeed, the Master claims he knows everything about everything and seems to genuinely believe so. 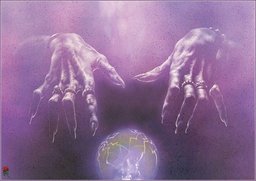