A Darfari barbarian, who fell prey to Pteion the Damned

Dahab was one of the Darfari slaves brought to Pteion the Damned by Nefertari and young Korzetta. They were used as physical laborers and sacrificial fodder during the excavations. Eventually Nefertari lured them and the Zingaran cultists deep in the bowels of Pteion. There she fed them to the Guardian of Pteion in exchange for ancient tablets inscribed with unspeakable secrets. Dahab was the only one to escape.

He hid for a day in the ruins, unwilling to face Nefertari alone. During the night, the dead of Pteion rose from their slumber, no longer kept in check by presence of the vampiress. Dahab fled the long-dead warriors, accidently stumbling head-on at Alcemides, Noam and Tyrus. They fought together, defeating the undead horrors. Dahab then joined the trio in their quest to tackle the mysteries of Pteion and find out what the cultists wanted from it. They were as well looking for Dionysos, who had gone missing somewhere inside.

In the bowel of Pteion, many strange wonders and horrors were met. The barbarian fought bravely and helped the Nemedians gain much wealth. Yet Pteion was loathsome to let itself be looted and the Guardian arose again from its slumber. The robbers had to flee from the underground maze with the fires of hell almost literally at their heels.

Outside the desert had come alive with giant hyenas. Dahab and Alcemides left the treasures they had taken and the hyenas allowed them to pass to the sand dunes beyond. Noam and Tyrus stayed in the ruins, wondering what to do. As night came, the dead Pteion started to patrol the streets, looking for the robbers. Next morning, Noam and Tyrus made the run for it, trying to get past the hyena blockade. They were delayed and attacked.

Dahab ran to the aid of his comrades. His luck ran out and a gigantic hyena ripped off his leg, sucking out his life in a stream of bright red blood. His life was drank by the desert sands and flesh devoured by the hyenas. His companions were too busy to flee for their lives to give the corpse a burial or even a second glance. At least he died as a free man. 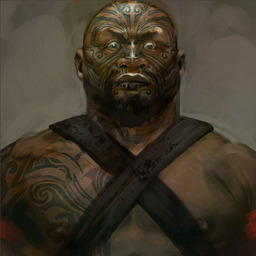