A religious mercenary with a dark past

Ditrius never told much about his past prior to Stygia. He served in the various mercenary regiments on the southern border for several years. During the time there, he befriended the blind priest Selcides, as they both hailed from Nemedia. Ditrius had never been a religious man, but Selcides convinced him of the importance of faith. Perhaps it could redeem even the most vile cutthroat.

On their way back home to Nemedia, Ditrius left the others with an impression of complete fearlessness. Even eldtrich horrors, such as byakhee, failed to even excite him. Ditrius faced creatures from beyond with little reaction but a small smile, as if he lived for those moments. His skill with sword and a shield was remarkable. Ditrius had as well learned how to use a Stygian bow in the long years spent in that dark land. Despite his unschooled nature, the Nemedian seemed to know much about the arcane and eldtrich.

The others saw Ditrius for the last time as they arrived to Belverus. He bid them farewell, before escorting Selcides and the two other travelers to the temple district. When the heroes investigated death of Selcides, they found no trace of Ditrius. It was as if he had disappeared to the thin air, together with the Shemite girl and the mute Darfar. High Inquisitor Demetrio claimed that Ditrius was in fact a fugitive, wanted for decade-old case of rape and murder.

Perhaps he is still at large or perhaps he was assassinated by those who killed Selcides.

“I’m beginning to think myself a poor judge of character. Ditrius was protective and devoted to his charges to the point of obsession, which I wouldn’t associate with such a past. Of course, if Selcides wasn’t who he claimed to be, this web may be more tangled than I dare to fathom. I may never find out.” -Tyrus the First 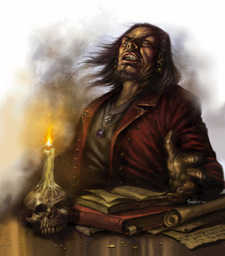