a peerless archer and a master of beasts

I can’t live the button-down life like you. I want it all: the terrifying lows, the dizzying highs, the creamy middles. Sure, I might offend a few of the bluenoses with my cocky stride and musky odors – oh, I’ll never be the darling of the so-called “City Fathers” who cluck their tongues, stroke their beards, and talk about “What’s to be done with this Flavius Festus?”

Flavius was born in Bossonian Marches and lived a pretty ordinary Bossonian life until he was drafted to the Aquilonian army archers. Fighting border wars and finally seeing the Hour of Dragon, Flavius was completely disillusioned and wanted not to wage wars for nobles and witches. Seeing the ordered structure of civilization as shackles, he became a mercenary and a highwayman.

For a while Flavius lived in Zamoran mountains with a horde of robbers but his rebellious attitude finally got him banished from the group. Living off the land and wandering aimlessly he stumbled upon a group of travelers and got hired as a guide and scout.

Flavius’ companions include his beast allies Radium the cobra and Xantos the attack dog.

Surviving five paralyzing spells, two death-touches and five hits from Content Not Found: basil’s death-stick in one combat, Flavius showed to be of pure Hyborian blood and gained a bonus feat:

Man of Will
Your pure Hyborian blood, refined in the fire of battle, grants you incredible strength when faced with sorcery and its creations.
Prerequisites: Hyborian only
Benefit: When a sorcerer targets you with a spell and you make your saving throw you immediately gain a +1 bonus to your attack rolls, damage rolls and saving throws for a number of rounds equal to your Constitution modifier.

I don’t know but I’ve been told: 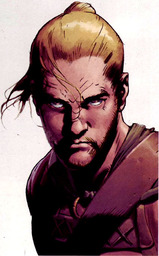