Nefertari is a lithe woman over six feet tall. She bears the countenance of Acheronians – or perhaps the Giant-Kings. Her skin is very pale and her hair raven black. Her wiry build conceals surprising speed and strength augmented in undeath. Nefertari might be considered beautiful, if it were not for the cold cruelty her very being embodies. Usually she is surrounded by an aura of cruel bemusement, as if the entire world was but a jest for her enjoyment.

Her capabilities remain unknown to the heroes. It is known she excels at manipulating people, even without the use of her vampiric domination. Her physical strength surpasses even the feats of strength kegends attribute to vampires. She seems to know very much about arcane matters and is almost completely immune to divination.

The heroes first leaned of Nefertari when the information dealer Niccolo asked Tyrus to find her. Tyrus had turned to Niccolo for aid in fulfilling his obsession regarding the Scrolls of Vathelos. Niccolo asked him to seek information about he woman in the dark land of Stygia and gave the Nemedians a portrait of her.

During the time spent in Stygia, the Nemedians realised Nefertari was somehow connected to the cult of the Golden Lord. When they arrived in Pteion, they saw a lone figure ride furiously away from the ruined city. The heroes did not realise at the time that the lonely rider was in fact Nefertari. By deciding not to investigate and instead go forth to loot the cursed ruin, they lost her trail for a long time. In the ruins, Dahab the Darfar and young Korzetta explained how Nefertari had sacrificed most of the expedition to gain possession of ancient stone tablets.

On their way towards Messantia through Shem, the heroes heard sporadic tales of Nefertari’s passing. The Child of Nergal they met confirmed that she was a vampire. The Child said Nefertari held allegiance to no one but herself. It was not like her to submit to the will of others – much less worship anything. Thus she must have been bribed or blackmailed to do the bidding of the cult. Attempts to gain information on Nefertari or her location only succeeded sporadically and yielded little. For a long time, the adventurers thought her to be their main adversary, responsible for various trouble on their way.

When the Nemedians contacted Niccolo again, he provided Tyrus with a clay tablet inscribed with his features. He instructed the Nemedian to break the tablet if he ever came to be near Nefertari. Niccolo seemed certain that their paths would cross again. Again, he offered no explanation on his interest at the vampiress.

On the way back to Nemedia, the heroes stopped at an island temple of Ishtar. Inside the temple, Niccolo had told, the priests held one section of the Scrolls of Vathelos. Instead of easy bargaining, the heroes found themselves embroiled in a sorcerous plot. The temple had been covertly taken over by worshippers of the Sabatean Golden Peacock. It became obvious they were allies of the cult – or perhaps the Golden Peacock was just another name for the Golden Lord.

In the temple, the heroes found evidence of Nefertari’s passing. She had left her sarcophagus in the temple, filled with copies of old records. It seemed that she had been tracking family trees of a certain Nemedian bloodline. In the same catacombs, the Scrolls of Vathelos were finally found. The Nemedians, however, were trapped. Knowing their worth to Tyrus and Dionysos, Nefertari had left an alchemical bomb in the chest the scrolls were locked in. She intended the Nemedian sorcerers to see the scrolls before their eyes and then witness their destruction. Unfortunately for her, the bomb failed to ignite properly.

The tracks of the vampiress seemed to vanish then, though the heroes guessed she was heading towards Nemedia for some purpose. Deciphering the records, the scholars learned the bloodline in question originated from a scholarly explorer of centuries past. Rumour said he had acquired the altar of Dagoth Hill, from that dread place. Basil was naturally intrigued. After the heroes finally reached home, they forgot the vampiress for a while, not having seen their homeland for a long time. Then they heard she had broken in to a private museum in Numalia and stolen an object which could only be the altar.

When the party departed for Zamora, they managed to overtake Nefertari by taking and eldtrich shortcut through the mountains. After their business with the cult in Shadizar was completed, they decided to head for Dagoth Hill, for which Nefertari had set off only days before. Rumors claimed that whoever returns the altar to the ruins would be rewarded – even by bringing the dead back to life.

On Dagoth Hill, the wonders and horrors of the ancient site subdued the fighting spirit of the party. They decided not to confront Nefertari with violence. Instead they only witnessed her peacefully waiting in the confines of the Well of Dagoth, perhaps for the reward of returning the altar. On their way out, Tyrus paused to break the clay tablet Niccolo had given him. As Nefertari did not seem to care, the Nemedians concluded that their business with Nefertari was complete….

..or so they assume. 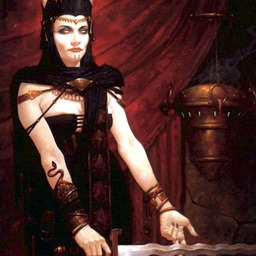