The transcendent one, seeker of forgotten secrets, tomb delver extraordinaire and an alchemist without an equal

Statistics of the Basil are irrelevant because he can only be truly measured on the scale of the ultimate power. However, for the inquiring minds desiring for more glimpses of the Basil’s might the rumors circulating in Northern Hyboria describe the Basil as quick as lightning, as cunning as covenant of sorcerers, as perceptive as thousand awakened owls and he is said to have a precense that gives even demon lords themselves a pause. Add to that:

At this point even the most backwater illiterate pict ought to understand what kind of force of cosmos the Basil is.

“Some puny hexes by a long-dead witch king or two won’t stop me. The worse the curse, the more power to be had.” – the Basil

“Oh Zath, cleanse my brother’s soul of this obsessive lust for power at any cost” -Luba, Dionysos’ wife

“I used to think of him as a megalomaniac, but every passing day I fear more that he might merely be a maniac.” -Tyrus the First 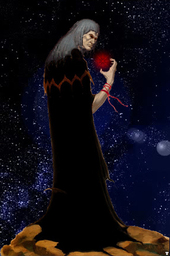